Cameroon : Manka Angwafo, an entrepreneur at the bedside of small farmers 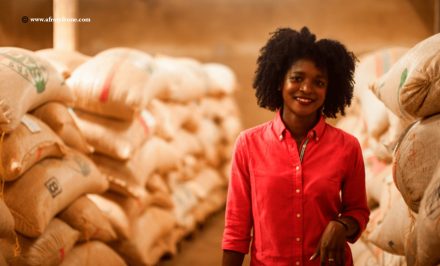 Manka Angwafo is a Cameroonian entrepreneur in the agribusiness sector. In 2015, she founded Grassland Cameroon, a social company which provides small farmers of cereals in Cameroon with solutions to store and market their crops, but also to modernize their means of production. Thanks to this initiative, she won in 2019 the Cartier Women’s initiative Awards.

After graduating in economics and international relations and “European business”, she started her career at the World Bank in 2009. At the start, she was in charge of mergers and acquisitions operations, before working as a research analyst in the World Bank office for the Africa region. From 2009 to 2011, she was part of the coordinating team reviewing and assessing african countries’ country policy institutional assessment and post-conflict policy institutional assessment. While working for the international institution, she also discovered her passion: agriculture.

From World Bank to agribusiness

When visiting her grandmother on her farm in 2013, she explains in her testimony for the “Cartier initiative” competition, she went out in her fields and realized that she struggled in her work and essentially used rudimentary means, causing a huge loss of earnings. But her grandmother’s experience was not a special case, since most of the small farmers in Cameroon, the majority of whom are women, cannot make a living from their work. Not only are the losses considerable due to the use of rudimentary means, especially in the rainy season when it is difficult to store and adequately dry the cereal crops, but the latter face financing challenges in order to acquire agricultural equipments to improve their means of production. If rare institutions grant bank credits to small farmers, the repayment rates remain high and are fixed between 25 and 35%. To help small farmers overcome these difficulties, she founded in 2015 “Grassland Cameroon”, a social company based in Douala.

To effectively help farmers, the company created infrastructures to dry and condition grain after harvest. It also developed a solution that offers farmers financing to improve their production and which they can reimburse in grain. Through NGOs, Grassland Cameroon selects small farmers who are in a vulnerable situation and capable to repay the company in cereals and offers them loans. Repayments are made at harvest time. After receiving the refunds, the company then purchases the remaining 70% of the crops from farmers, which it sells to industrial buyers. This allows small farmers to increase their incomes. The company also provides small farmers with training in production planning, pest control, water management and also lends them agricultural production equipments to enable them to increase their production. In four years, the company has already supported more than 300 small Cameroonian farmers.

In 2019, thanks to this initiative, Manka Angwafo won the Cartier Women’s initiative Awards for sub-Saharan Africa awarded by Cartier and INSEAD Business School. An award which aims to support and promote women entrepreneurs and their projects.