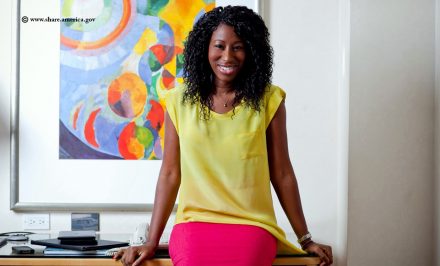 Saran Kaba Jones is a Liberian philanthropist and social entrepreneur. She is committed to a better access to water, sanitation and hygiene in rural areas in Liberia through her organization FACE Africa.

After leaving Liberia in 1989, during the civil war which hit the country, Saran Kaba Jones and her family settled in Ivory Coast, then in Egypt, in France and later, in Cyprus… In 1999, she arrived in the United States where she pursued her studies in international relations at Lesley College, then at Harvard. A journey that led her a few years later to work as an investment project manager for the Economic Development Council of the government of Singapore.

Eager to contribute to the development of her country of origin, she founded FACE Africa in early 2008, with the aim of providing educational opportunities to children and young adults in Liberia and other post-conflict countries. The same year, she decided to return to Liberia, almost twenty years later. While visiting hospitals, clinics, orphanages … across the country, she realized that post-conflict Liberia faced many challenges : extreme poverty, lack of electricity, running water, a failing educational system … She decided to redirect FACE Africa and devoted the organization to the challenge that seemed most urgent to her, namely water and sanitation.

End the calvary of water

Back from Liberia, her goal was to put an end to the calvary of the millions of Liberians who do not have access to drinking water and have to travel hundreds of kilometers daily to search for this rare commodity, which is very often contaminated and causes huge health problems. In 2009, thanks to a grant, FACE Africa carried out its first drinking water project in Liberia, installing a purification system capable of producing up to 20,000 liters of drinking water per day. In 2010, she left her position as investment project manager to devote herself exclusively to her organization. During the Ebola crisis that hit the country from 2014 to 2015, the organization was mobilized in the Rivercess district where only 9 out of 26 schools had access to drinking water, which had an impact on the health of students. FACE Africa built other water points to reach nearly 2,300 children without potable water in the region. To this date, FACE Africa has reportedly initiated 50 water projects in nearly 35 communities. It has installed nearly 300 mechanical water pumps, affecting more than 25,000 people.