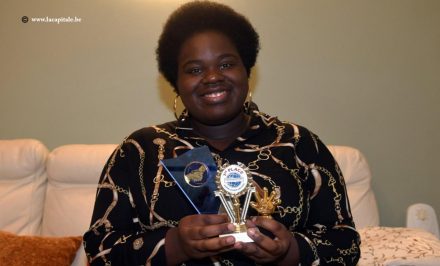 Comical, energetic, dynamic … Laëtitia Mampaka is passionate about the stage and speaking. At only 24, the young Congolese captivates each of her audiences with her aura, her words, her smile, her gestures, but also her strong capacity of persuasion. In three years, she has become an ace in public speaking. The young law student won the European Eloquence Championship in 2017 and other competitions in Europe, challenging all the racist criticism and prejudices she was victim of.

Since she discovered her passion for public speaking, nothing seems to stop her anymore. In three years, Laëtitia Mampaka, a Congolese student in international public law at the Free University of Brussels, has participated in series of public speaking competitions, not only to confront other candidates, but above all to develop her passion for public speaking. In 2017, she won the title of European eloquence champion among several hundreds candidates. In 2018, she took part in the Tournaments of the Academy organized by the « Trois » and the Royal Academy of Belgium on the Francophone Belgian Radio Television (RTBF). Her speeches did not go unnoticed. She stood out, notably with her speech on the theme “Does Belgium respect human rights? ” where she defended the thesis that Belgium is committed to respecting human rights. In 2020, the young lawyer conquered the hearts of the French. She participated in the Grand Oral on France 2 hosted by Laurent Ruquier. She was one of the 9 finalists out of 580 candidates. She delighted the hearts of the audience with her speech « Attorney, I stole the world cup » before a jury made up of the famous lawyer Eric-Dupond Moretti, the film director Isabelle Nanty or the comedian and actor Kheiron. The audience was captivated by her sense of humor, as well as the jury. Even if she did not win the competition, she made an excellent performance which made her known, especially in France.

« I was told that for a Congolese woman, I spoke French too well »

If speaking in public seems natural to her, it is because from a young age, the young Congolese already loved to speak. She liked to talk and even sometimes disturbed those who listened to her. “I have always been very talkative. People were a bit tired of listening to me. But it’s not talking too much that bothers, it’s talking to say nothing. When someone captivates us, we can listen to her/him for hours. When I understood that, I said to myself : why not? “, she said to RTBF. If she developed public expression skills very early, it is also because of her family environment, she said. “I have a father who is very open-minded. Little by little, I wanted, out of pride, to win a debate against him. What I have never managed to do so far. And that’s where this love of eloquence came from, “she explained on the Belgian channel. However, to stand out in public speaking contests, she needed much more than passion. She had to overcome obstacles and face racist prejudices. “I was told that for a Congolese woman, I spoke French too well, that the level was too high and that I had to lower it if I wanted to be worthy of my origins,” she told RTBF. During these trials, she decided to make the stage her “mode of survival”. With humor and her speeches on stage, she managed to “keep her head above water” and won several competitions.

Today, she has eight national and international titles after participating in 12 competitions. Her next ambition is to win the World Championship of eloquence, but also to become a diplomat. Laëtitia Mampaka is an eloquence coach and was a TEDx coach. She presented workshops on public speaking within companies (UPS, Orange…). Recently, she launched an online eloquence platform, www.laetitiamampaka.com, where she trains, in particular young people on public speaking, body language, variation of voice… to reveal the speaker who sleeps in them.