Login Sign Up
Headlines :
Pr Coumba Toure Kane : « Do not take chloroquine as a preventive medicine » 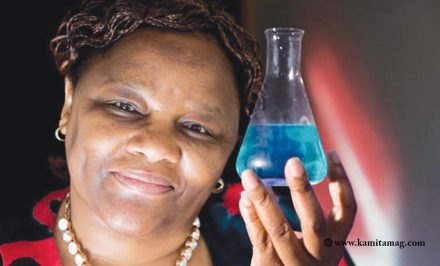 Tebello Nyokong is a chemist from Lesotho. She is a professor of medicinal chemistry and nanotechnology. She is known for her research on photo-chemotherapy that she has been conducting for years. An alternative to chemotherapy, which kills cancer cells in the body without damaging healthy ones.

She began her career at the beginning of the 90s, after following postdoctoral studies in chemistry in the United States. She taught briefly at the University of Lesotho and joined Rhodes University in South Africa in 1992. During this Apartheid period, it was difficult for her to make a way in this very closed field of research. But she finally obtained a research laboratory at her University thanks to the National Research Foundation. This is where she has done most of her research.

Finding the first cancer treatment « made in South Africa »

At the very beginning of her work, Tebello Nyokong focused on nanotechnology and explored in particular the laser. After undertaking research into the application of the laser in healthcare, she decided to explore its use in the treatment of cancer. She conducted research on photo-dynamic therapy, a method consisting in developing molecules which can be used as chemical sensors to detect molecules linked to diseases. Unlike chemotherapy, this technique preserves healthy cells and only kills cancer cells through lasers. Several studies have already been carried out in this field, but the peculiarity of the chemist is to show how the combination of laser light with dyes and nanoparticles can make it possible to detect and treat cancer more safely, limiting the harmful effects of chemotherapy. She is working, in particular on a molecule extracted from the dye for jeans. She dreams of making it the first cancer treatment made in South Africa.

Committed to environmental issues and the training of African researchers

In addition to her cancer research, she also works on water issues in Africa. She explores the use of nanotechnology in water purification in the United States International University in Kenya and the University of Ottawa. As a professor of medicinal chemistry and nanotechnology at Rhodes University in South Africa and director of the Center for Nanotechnology Innovation (Mintek), she is also dedicated to the training of young African scientists and professors in her research laboratory. According to the Pretoria University website, she has supervised more than 70 master’s and doctoral students and has published more than 550 manuscripts (patents, a book and chapters in books).

Tebello Nyokong holds a bachelor’s degree in chemistry and biology from the University of Lesotho in 1977 and a master’s degree in chemistry from the Mc Master University in Ontario in 1981. She also obtained a doctorate in chemistry in 1987 from the same university. She has received several distinctions for her research, including the Kwame Nkrumah Scientific Award granted by African Union in 2016 and « L’Oréal-Unesco award for women in science » given by L’Oréal Foundation in 2009.