Login Sign Up
Headlines :
Laëtitia Mampaka, the Congolese who excels in eloquence competitions

Closing session of the 3rd Panafricaines : Network journalists vote for the priority of the 2020 action plan 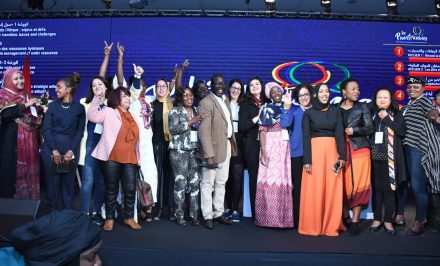 Casablanca, Saturday March 07, 2020 – The 3rd meeting of Panafricaines wrapped up today, after several days of meetings and rich debates with the participation of over 300 women journalists from 54 African countries. The participants tackled the key theme: “Climate emergency: media agents of change“.

The plenary session was a report back session which allowed heads of workshops, accompanied by the supervising experts, to present a plea in favor of the chosen theme. Supported by screenings of witness-videos, these pleadings highlighted the different courses of action favored by the participants of the Forum.

The day before, seven workshops had enabled the Network journalists, accompanied by experts, to tackle the different aspects of the climate emergency.

The first workshop was themed: Succeeding Africa’s energy transition: issues and challenges. Discussions were led by Abderrahim Ksiri, National Coordinator of the Alliance for Climate and Sustainable Development. During the report back session, he said that “about one billion people, or 13% of the world’s population, still live without electricity. In Africa, one in three people living in rural areas does not have access to electricity“.

The second workshop was organized around the theme “The challenges of rational management of water resources”. Fouad Amraoui, university professor, stressed that “a third of the African population, or 330 million people, do not have access to drinking water. Almost half of Africans suffer from health problems due to lack of drinking water“.

The theme of the third workshop was “Sustainable agriculture: a green economy for Africa”. The Fettouma Djerrari Benabdenbi, co-founder of the Movement “Earth and Humanism in Morocco”

Stressed that “African agriculture is a vital sector which creates many direct jobs and generates income for around 70% of the African population. ”

The fourth workshop tackled the theme of “Health impact of climate change, which strategy to adopt?”. Rachid Wahabi, Head of the Environmental Health Department at the Ministry of Health said that “climate change directly and indirectly impacts human health, through natural disasters that cause injury and death, and malnutrition and disease“.

The fifth workshop provided answers to the question: “What sustainable development for African cities?” Mohamed Nbou, Special Advisor to the Secretary General of United Cities and Local Governments of Africa, member of the Africa Climate Task Force, said: “African cities cause problems and provide solutions. Globally, cities currently consume two-thirds of energy and generate more than 70% of carbon emissions“.

Themed “Waste management, a key lever in the fight against climate change”, the sixth workshop was supervised by Ana Lê Moraes Rocha, Executive Director of Nipe Fagio, a pioneer Tanzanian organization in the field of environment and waste management in Tanzania. During the report back session, she stressed that “poor waste management affects the most vulnerable populations. Over 90% of the waste burned or dumped in uncontrolled landfills is in low-income countries“.

The seventh and last workshop took the form of a traveling working group, with the aim of bringing together the various proposals made by African women journalists and reflecting on their effective implementation. Aziz Diouf, President of the Moroccan Network of Energy and Sustainable Development Journalists, stressed that “The recommendations made by each workshop organized around the issue of climate change require further reflection in their implementation“.

The Network journalists then voted electronically to set the priorities of the 2020 action plan. They voted for “media agents of change” (24% of votes), followed by the health impact of climate change (19%), water resource management (15%), waste management (13%), sustainable development in African cities (10%), Africa’s energy transition (8%) and sustainable agriculture (8%).

The 3rd Panafricaines wrapped up with a speech of Samira Sitail, member of the Permanent committee of the Forum, who said: “Today, we as members of civil society are obliged to succeed where political organizations and government officials have failed. We are all different and, at the same time, all alike. As women journalists, we face the same problems and difficulties. We also share the same energy and the same will to move Africa forward. Let’s be united, it’s union that will make us strong“.

Initiated by 2M in 2017, “Les Panafricaines” is a network of African women journalists whose members come from 54 African countries. This network aims to promote greater responsibility of African media in the treatment of key issues of interest to public opinion on the continent, as well as to be a genuine platform for debate and advocacy.