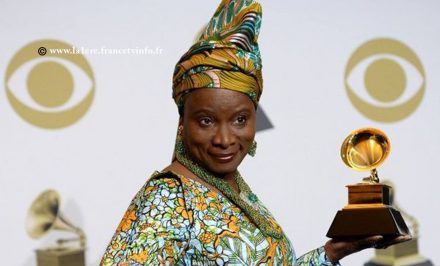 The Beninese singer, Angélique Kidjo, won a 4th Grammy Award, on January 26. The musician was rewarded in the « World Best music album » category for her album « Celia » released in 2019.

Angélique Kidjo won her new Grammy during the 62nd Grammy Awards held on January 26 in Los Angeles in the US. The musician and composer picked up the famous award at the expense of the Nigerian singer Burna Boy who was also favorite with his album « African giant ». The Beninese singer was rewarded for her album « Celia » which pays tribute to the singer of Cuban music and salsa, Célia Cruz, who died in 2003. Before 2020, Angelique Kidjo had already won three Grammy Awards, namely in 2007 for her album « Djin Djin », in 2014 for « Eve » and in 2015 for « Sings ». Since 1958, the National Academy of Recording Arts and Sciences (NARAS) attributes the prize to reward the best artists and technicians in the field of music.

Angélique Kidjo is a prolific singer with 13 albums. Her songs defend the rights of women, promote the independence of Africa and enhance its cultural richness.

Born in Benin in 1960, Angelique Kidjo started singing at the age of 9. At an early age, she was already influenced by great figures of African music such as the South African Miriem Makeba whose songs she interpreted. In 1981, she recorded her album, «Pretty », which was a hit. The artist toured in West Africa. But due to unceasant conflicts in Benin, she decided to emigrate to France in 1983 in order to practice her music independently. In Paris, in the early 90s, she met her future husband, the composer and musician Jean Hebrail, at the « Centre d’informations musicales » where she studied. He is the one who has written most of her music.

In 1991, she was discovered by Chris Blackwell, the founder of Island Records, Bob Marley’s record company. She signed four albums with them, notably « Logozo », « Agolo », « Ayé » and « Fifa ». From 2000 to 2019, she released 10 albums in several languages. She also recorded songs for films, television series … In 2003, she interpreted the song « Vodoo child » for Martin Scorsese’s film « lightning in a bottle: one night in the history of the blues ».

In addition to music, Angélique Kidjo is a UNICEF Goodwill Ambassador. She also campaigns for the education of young girls in Africa through her organization, « Batonga » foundation.