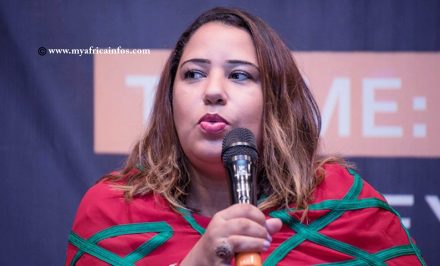 Karima Rhanem is the president of the International Center for Diplomacy, founder of « Africa my home » organization and expert in youth policy. She is committed to youth, Africa and the promotion of citizen diplomacy. In 2019, she was selected among top « 30 most influential young leaders in Africa and Europe » by the Pan African Foundation for the Promotion of Youth Leadership.

After various voluntary actions in the early 2000s with marginalized populations in Morocco, street children and young offenders, Karima decides to commit herself to defend the rights of the most vulnerable, especially African youth. As a communication and media graduate, she writes to denounce their inhumane living conditions. She also involves in various initiatives targeting youth. She co-creates the African network of youth policy experts. In 2016, at the African Economic congress in Abuja (Nigeria), she launches « one million signatures to reduce airfares in Africa » initiative. The aim is to facilitate the inter-african mobility of youth and women.

In 2017, she founds « Africa my home » to strengthen the economic and political empowerment of women and youth in Africa through innovation and technology. The organization has signed two partnerships with Helpline Foundation for the Needy Abuja and ILCS Africa to promote the education of the African girl, to develop digital coaching platforms for women and organize the first civil society dialogue between Morocco and Nigeria.

In addition to youth and Africa, Karima Rhanem is interested in citizen diplomacy. For her, it is « the only way to bring people together ». In 2011, she created the International Center for Diplomacy (ICD). The organization contributes to building the capacities of non-state actors in diplomacy, global leadership and advocacy in order to improve their representativeness in multilateral organizations, such as the United Nations, the AU, the EU, etc. In 9 years, the ICD has gathered more than 4,000 actors and encouraged the participation of young men and women in international conferences in more than 22 countries.

Since 2019, Karima Rhanem is a humanitarian ambassador for World Habitat Ambassadors Foundation. From 2013 to 2014, she was a member of the « National Commission in charge of dialogue on civil society and new constitutional prerogatives » in Morocco.