3 African women who shone this March. 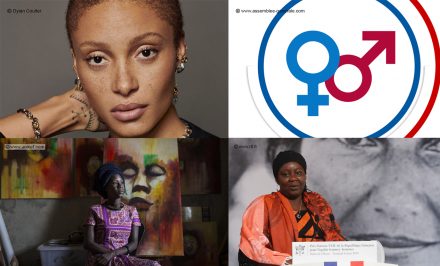 On March 8th 2019, the world celebrated International Women’s Rights Day. Throughout March, African women took the floor and claimed their rights through artistic expression. Here are the three African women who shone this month.

Born in 1972 in northern Cameroon, Aissa Doumara Ngatansou was married at 15 without her consent. In 1996, she co-founded a section of the Association to Combat Violence Against Women (ALVF). On March 8, 2019, she receives the first prize Simone Veil from the hands of Emmanuel Macron, for her activism against forced marriage.

Ghanaian-born model Adwoa Aboah founded Gurls Talk, an online community dedicated to young women, to exchange ideas on topics such as education, mental health, sexuality, well-being and relationships. On March 7th, 2019, she became one of Barbie’s inspiring new series of heroines , created by Mattel, for the 60th anniversary of the famous doll. A big step for diversity.

“I am a voice bearer, and my goal is to help, to denounce, to cry out if necessary. It is through my painting that I can lead this fight “. After setting up several artist collectives, Amy Sow, a Mauritanian who uses her artistic work to end violence against women, is in the ranking of the 100 Africans of the year of “New African” magazine. It is a work of nearly fifteen years that is, thus, valued.

Three African voices that rise in unison and advocate a better regard for the African Woman. Thanks to them for having illuminated this month of March with their valiant actions and distinctions!